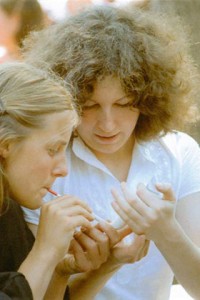 Four years ago (22 February 2012) on this day, the world lost a tireless human rights supporter, a determined and fearless award-winning war correspondent, a glamorous and charismatic woman, and an advocate for all the violently oppressed peoples in the world. Some of us also lost a good friend who was capable of grand generosity, soaring mirth, intense loyalty, and glorious irreverence. She died covering the beginning of the Syrian Civil War, and the massacre at Homs, Syria. It was a place and a story others were afraid to cover. It was not the first time she had done such a thing. I was honored to have known Marie Colvin sine 1975, and to have had her so involved with my novel that she carried it to that dangerous place. Gospel Prism is dedicated to her memory; twenty percent of the royalties go the Marie Colvin Memorial Fund.  A wise man once said that the cost of love becomes dearer as we age, because it is spent more on those who are no longer with us.  –Gerald Weaver