Tribute, in the LST, to Marie Colvin, (who inspired Gospel Prism)

This trinute appeared in The Sunday Times online, 22 February 2012

Posted in: Behind the Book 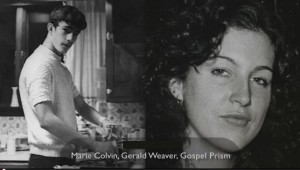 Marie Colvin sat across the table from me in the kitchen of her Thames-side home in the Hammersmith neighborhood of London on October 18, 2011, as she looked me in the eye and gave me a completely unexpected answer to a question I had long planned to asked her. “So, Marie, do you have some kind of a death wish or something?” I had asked, waiting and watching her intently. I had expected that she maybe she would react a bit too defensively or that she might have otherwise partially admitted to the premise of the question. But I realized immediately that it had been the quintessentially stupid question. The gist of her answer was that these were normal people who were being attacked, bombed, uprooted and murdered in the stories she was uncovering and reporting. The normal people who would read her reports should have a normal reaction to them, she said. And by that, she meant they should be appalled and horrified. So for Marie it was merely normal to pick up and go find the most terrible story that no other reporter would cover and then report it as a matter of fact. The danger simply did not occur to her. She neither feared nor courted it. As I listened to her, I heard the word “human” for the word “normal.”

She also had no interest in romanticizing or aggrandizing what it was that she did in her work. She used to laugh it off when I would call her “the distaff Ernest Hemingway of Great Britain.” I was in London those four months ago at her urging, because I had just written the first three chapters of a novel that I had only started and only because she had urged me to write it, and which I have only recently completed with her encouragement and through her help. She then started talking to me about us contacting literary agents in London that she knew and it occurred to me ask her when she was going to write her own book about her very interesting, exciting and inspiring life. I knew that the possibility of such a book would be why agents would have wanted to court her. She only laughed and suggested that maybe I should write her book. She was only interested in reporting, not in making herself the story. She was in her life and in her death utterly heroic, but she would have been the last person to think that or to want to even talk about it.

Marie also had that same good natured disinterest when it came to politics, or to her more difficult role as a woman in her profession, or to moving about in a part of the world that was not particularly easy for a woman. For the almost forty years that I knew her, she only ever addressed politics obliquely. I always assumed she was a liberal. But it was more than that and it was much different. She was, through her work and her life, a liberalizing force within the world. She hoped to speak to a better part within us all that she felt simply must empathize with the least fortunate, the terrorized, the forgotten and the innocents who are under attack. And when she called me on her satellite phone one night this past December, it was only in passing that she mentioned how she had been chased through Tahrir Square on the same night that many women had been assaulted there. And even then she only spoke of her gratitude to the Egyptians who had saved her and not of the special dangers to her as a woman.

She used to always apologize for often being out of touch, for answering with one phone call three or four weeks of daily emails, for disappearing for weeks or months on end. I have no doubt that for many of us who were even her closest friends that her columns in the Sunday Times were perhaps the most reliable way for us to hear her voice and know what was on her mind. It was almost as if she was expressing her worry that her relationships were like her politics or what she might say about her work or what it meant to her to be a woman war correspondent. They came after her need to tell the story. My best insight into this came the day after I had asked my stupid question, on October 19, 2011, the day it was reported that Muammar Gadaffi had been killed.

I watched her at her home in that morning as she accomplished what would have taken anyone else several days. She juggled several phones, gave an interview to National Public Radio, made calls in English and French to make arrangements for two separate clandestine border crossings, made flight arrangements, coordinated with other reporters, communicated with her office, dug up leads, tracked down reports. And that was all the while she was packing and gathering up several different phones and communications uplinks, taking deliveries at the front door, and pulling out her helmet, her flak jacket and all her other protective gear, which was all marked, “Marie Colvin, O +,” for her blood type. She laughed about that too, and all the time she was apologizing for cutting our visit short. She was generous to a fault and she showed her idiosyncratic disinterest when it came to compliments. And when I pitched in and helped her prepare to leave in what limited ways I could, she was surprised by it and slightly embarrassed.

But what I noticed that morning has stuck with me now that she is gone. There can be no doubt of the magnitude of the loss that is encompassed by her death, personally to her family and friends, professionally in the realm of journalism, and even to the world in what has been lost in the reporting of stories that are the most harrowing and dangerous to reporters and perhaps the most important for the rest of us to know. When I read what has been written and what I write about her passing, and even when I read what has been reported about what Marie herself had said about the importance of reporting these stories, I realize that all of it is true but that all of it is necessarily a reduction of what she actually was. That morning she was incredibly alive with a passion to get to the story and to tell it. And she was filled with what can only be called joy. In all the moods and stages of her life in which I had witnessed her, at that moment of going to cover the story she was the most of who she really was, and she was at one with it.

She was a tirelessly brave and compassionate female war correspondent, true. But to me she really was what few people ever get the opportunity to be and what almost none of us have the will to be. She was a free artist of herself and of her life. Her commanding if almost sole interest was in being our eyes and ears in places where most people would be afraid to look or to go. I think the joy I saw in her was that she knew how rare such a life can be, and that she was fortunate to be living it. That is the small personal consolation that I draw from her death. It would be tremendous if something positive would come out of it in terms of expediting the end of the massacre in Syria, but I believe that is something even she would not have expected and would have been something for which she had only hoped. The possible larger consolation would be to the way in which her death might speak, in the same way that her life and her reporting had, to that part of us that should care for the world’s innocent and obscure victims. And I also hope that it might speak to some others who might be inspired to go in her wake and report those same kinds of stories to the world, and do so regardless of the personal risk and do it heroically, as did my friend, Marie Colvin.