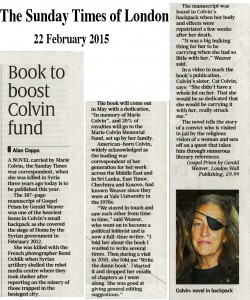 Here is a link to an article which appeared in The Sunday Times of London on 22 February 2015, which relates the story of how Gospel Prism was inspired by Marie Colvin.  “American-born Colvin, widely acknowledged as the leading war correspondent of her generation for her work across the Middle East and in Sri Lanka, East Timor, Chechnya and Kosovo, had known Weaver since they were both at Yale University in the 1970s.”  Read here how she was closely involved in all aspects of the novel and how she carried it with her on her final assignment.  (The article also appears in the image to the left, and may be the better way to view it, if the Sunday Times pay wall keeps you from reading beyond the fourth paragraph.)